Introduction of the Yaesu DR-1XE repeater, its usage with Echolink and HRI-200 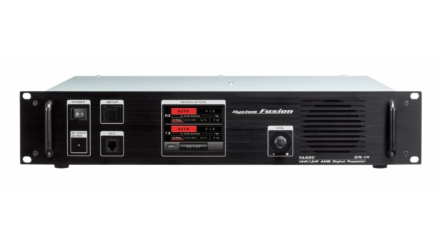 In 2015 the Yaesu Corporation started a large scale campaign to promote the C4FM digital mode.  With a series of sales and marketing activities, they made available the digital hand-held and mobile radios, the DR1X repeaters, making up the backbone of the system,  and the HRI-200 computer adapters. In this article the connection of the repeaters, and the use of the HRI-200 adapter, will be described.

As a practical example, the structure of the HG4RUC repeater will be described, which is operated by the Szöllősi József Radio Club in Székesfehérvár, Hungary. The description contains how the repeater is connected to the Echolink network, solving the interconnection between the old analog repeater system, and the new digital backbone.

The digital hand-held and mobile radios themselves, will not be discussed. We only focus on the heart of the system, which is the DR-1X repeater (pictured):

The Yaesu DR-1X repeater is a dual-band (VHF/UHF) equipment, which operates both in C4FM digital mode, and the traditional analog TX/RX mode.  Its mechanical setup supports the replacement of the old equipment, it can be installed in a standard 19” rack.  It is available in two versions: one without built-in power supply, which can be operated from an external 13.8V power supply, the other one has a built-in power supply, and can be operated directly from the 230V line.  The equipment can be set up (CTCSS, TX/RX frequencies, etc.) easily, using the colour touch screen on the front panel.
A good advice for the operators of the repeater: Take care of good cooling! In case of the conditioned rack, you can switch to continuous duty at 20 Watts of power.

Among a lot of setup possibilities, I would like to mention two important modes. The equipment supports the fully analog transmit mode, when the uplink digital transmissions are converted to analog. All signals are retransmitted in analog FM, regardless if it is an Internet Wires-X or C4FM signal. This is shown on the display like this: 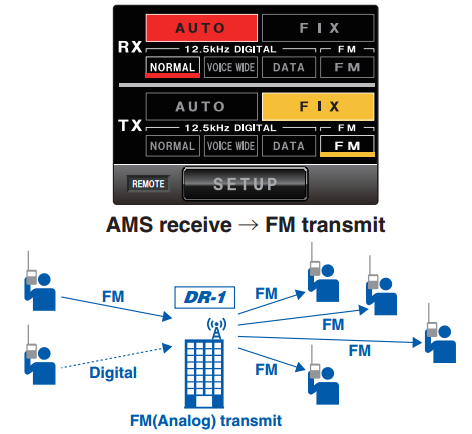 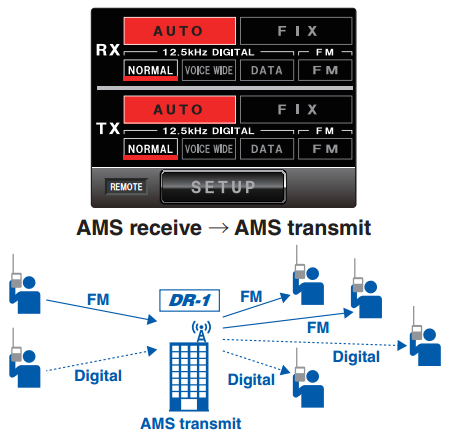 The current firmware does not support the digital transmission of the incoming signals from a Wires-X adapter, these are retransmitted as analog. This is possibly going to change with the development, since the firmware of the repeater is under continuous development. It is worth visiting the webpage of Yaesu for the latest versions.

Yaesu originally developed the Wires-X (Wide-coverage Internet Repeater Enhancement System) system for connecting analog radios, which provided the possibility to connect ham radios over the Internet. With this VoIP solution, amateur radio operators can make contacts beyond the range of the radio waves. See the attached figure.

To connect to the Wires-X network, we need a Yaesu HRI-200 type PC adapter, and obviously a PC, which is running under MS Windows. The HRI-200 is connected to the PC by a standard USB cable.  The operating program can be installed from the enclosed CD, or from the webpage of Yaesu, followed by a registration. This is an important step, when our ham call is registered in the system by Yaesu, a so-called Node number is issued.
The list of the active/registered stations can be found here: https://www.yaesu.com/jp/en/wires-x/id/id_active.php

The system updates this list every 20 minutes. At the time of writing this article, over 1100 Nodes were registered in the Wires-X network. With the client software, the stations can be browsed, and can also be contacted.

A quick guide to Echolink (www.echolink.org)
The history of the Echolink system goes back to the beginning of the 21st century. This is a Voice Over IP system, covering the whole world, which provides connections between analog radios over the Internet. It is possible to connect to these radios with PCs, and also with non-PC (IOS, Android smartphones and tablets) equipment.  At the time of writing this article, over 5700 Nodes were registered in this network. Similarly to Wires-X, your call sign has to be registered. By sending a copy of your ham radio license, the so-called validation procedure can be started.
While in the Wires-X system the HRI-200 adapter and a Windows PC provides the connection to the Internet, in Echolink you also need a computer radio adapter. This can be a PC (Windows and Linux both are accepted as the operating system) but it can be a simpler architecture computer, like the Raspberry PI, minimizing the hardware and operating costs.   The HG4RUC repeater in Székesfehérvár and the HG7RUA repeater in Érd, both chose this solution.

While the Wires-X is closed (only Yaesu radios have access) and provides compatibility and excellent quality, the Echolink is basically only capable of connecting analog systems, and connections to digital systems can only be provided by analog (FM, audio) signals. This analog signal can be forwarded by the digital system after an A/D conversion. The wide range of hardware supporting Echolink, results in an unsteady quality.

Wires-X provides so-called public conference rooms. These are also issued Wires-X Node numbers, and by connecting to them, we can join conferences with multiple attendees.  At the time of writing this article, some 760 Wires-X conference rooms were available, while the Echolink system has about 260 conference rooms. 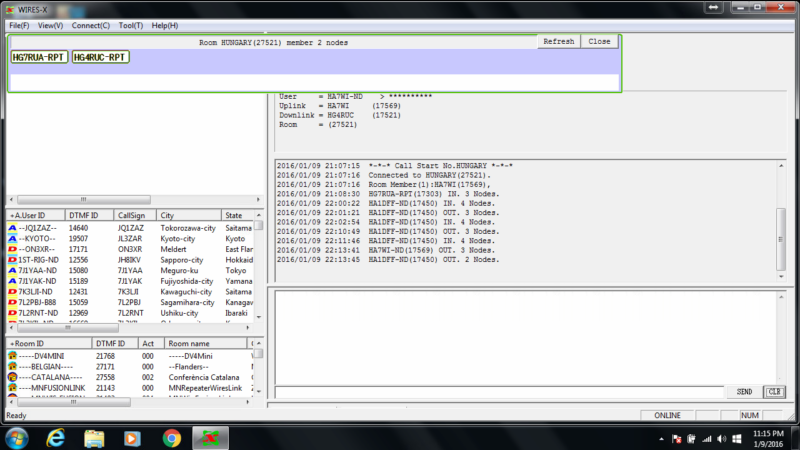 In the vicinity of the repeaters, using a traditional FM radio, both Wires-X and Echolink stations can be connected via the repeaters by DTMF tone codes.
In the Wires-X system, the nodes are identified by the DTMF ID on the Yaesu webpage. This consists of five digits, and the # character has to be dialled before to establish a contact.
*=disconnect – terminating the connection.
Same as #99999
#55555 – Turning on/off the return to the default conference room
#66666 – Status query. Querying the status of the Node.

Accessories: Internet cable modem and router. An interesting solution is the mains connector, remotely controlled by a smartphone, thus in the case of a malfunction, the repeater, or some units can be switched off.
The two systems are connected by the Raspberry PI computer – using analog signals. From the DR-1X repeater, through the DB15 connector, the audio signal is connected to the input of the USB port, and the output of the same USB port is connected to the transmitter of the UHF (RTL7007) radio.  The second USB of the Raspberry only makes connection between the VHF radio with the rest of the elements of the system, making the system accessible in the 2m band.
The controlling TheLinkBox program can control an arbitrary number of radios, and provides various pathways between them, in addition it provides the gateway to the Internet.

A good portion of the current repeaters are still operating isolated from each other, and in analog FM mode. Others do have some kind of an Echolink connection, which makes contacts possible beyond the radio range of the repeater, for the radio amateurs.  For the newest repeaters, supporting fully digital modes, there is a need for amateurs using analog and digital modes, to be able to contact each other. In addition to the earlier analog systems, digital equipment became available. This is a “nice” construction job for repeater operators. They can experiment with the latest software and hardware, hoping that the sparse activity on the repeaters, can be improved and be popular again. 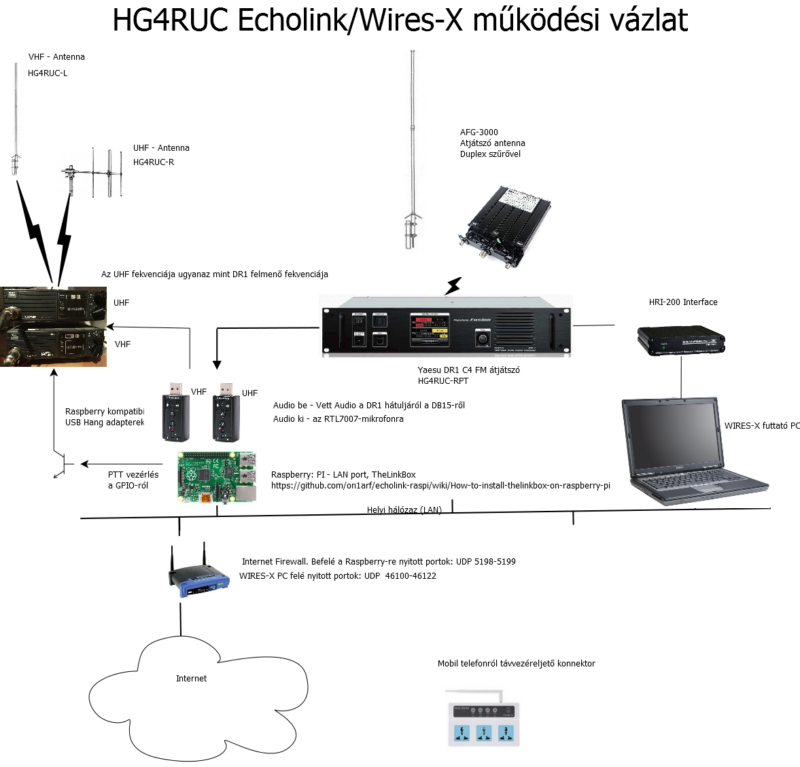